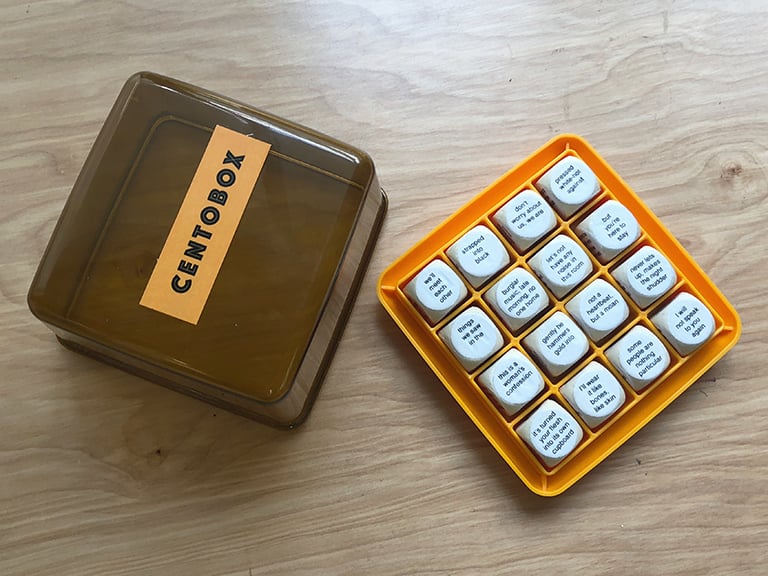 
From the Latin word for “patchwork," the cento is a poetic form made up of lines from poems by other poets. The word cento is also Italian for one hundred—some centos are exactly 100 lines long.

In CENTO BOX, 16 dice showcase lines from 16 different contemporary centos (see the full list of sources here). Shaking the box allows the player to explore 2,821,109,907,456 different poem combinations sourced from texts written by more than 250 individuals. A three-minute sand timer is included if the player wishes to operate under further constraint. Also included is a detailed instructional booklet outlining the rules of play and source citations for each of the 16 dice.

CENTO BOX is a exploration of found poetry, appropriation, and remixing—themes that carry throughout my work as a writer and artist. When writing a poem using CENTO BOX, the player is borrowing from not only the centos, but also the poems from which the centos were made. The questions only multiply from there—what is an original thought versus a borrowed phrase? Where is the boundary that separates whose words are whose, and who decides? Should there be a boundary? Where is the line between exploitation and the ethical use of language? These ruminations lead to a more universal question that many writers grapple with: what can be said that hasn’t already been said before?

We all create under some kind of constraint. Found poetry works for me because there is a ruleset, a limited playing field. It’s a language game that requires play, decision making, creativity, action.

CENTO BOX is stacked on a dusty game shelf, camouflaged in its unassuming package. Let your guests pull it out and shake the dice—what poems do they find? Place it on the corner of your desk, just beyond your laptop screen, inspiring you to let the words fall perfectly into place. Pulled from an archive a century from now, CENTO BOX will defy categorization, churning out poem after poem after poem.

Erin Dorney is the author of I Am Not Famous Anymore: Poems after Shia LaBeouf (Mason Jar Press, June 2018). She is the recipient of a 2017 Artist Career Development Grant from the Prairie Lakes Regional Arts Council/McKnight Foundation; a 2017 Emerging Artist Residency at Tofte Lake Center; a 2016 Spruceton Inn Artist Residency; and was the first Modern Worker: Writer in Residence at Modern Art in Lancaster, PA. Her literary erasure art "Dystopia Erased" was featured as part of Made Here: Future, an urban walking gallery in the West Downtown Minneapolis Cultural District and her collaborative conceptual art installation "The Hidden Museum, 2018" is currently on display at the Susquehanna Art Museum in Harrisburg, Pennsylvania. Erin is cofounder of FEAR NO LIT and volunteers with VIDA: Women in Literary Arts. You can find more of her writing plus projects and updates at erindorney.com and at @edorney.
Online Store by Big Cartel
0