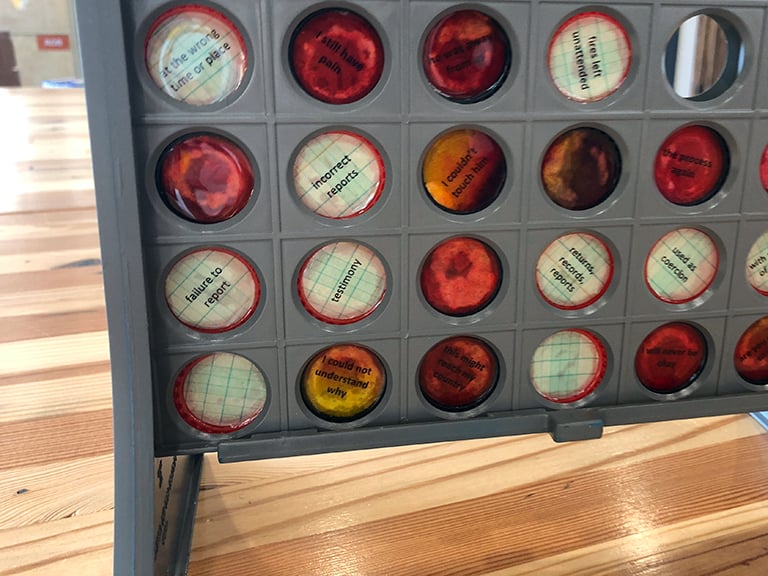 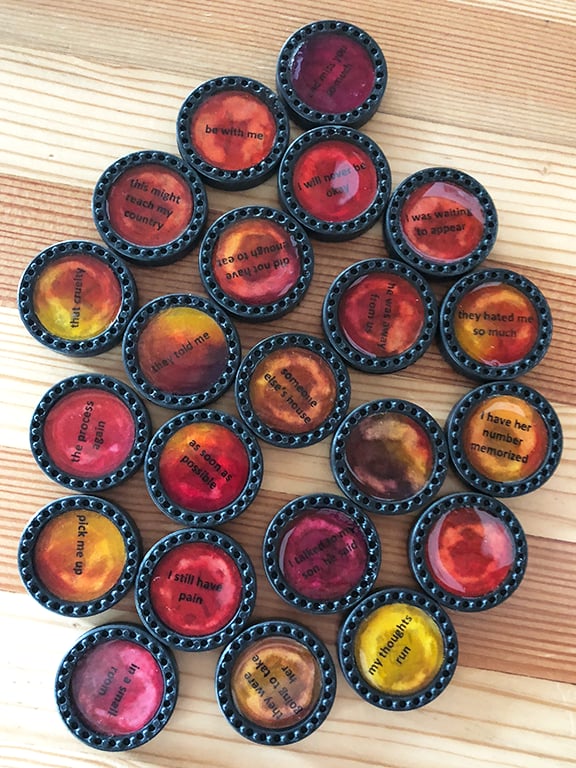 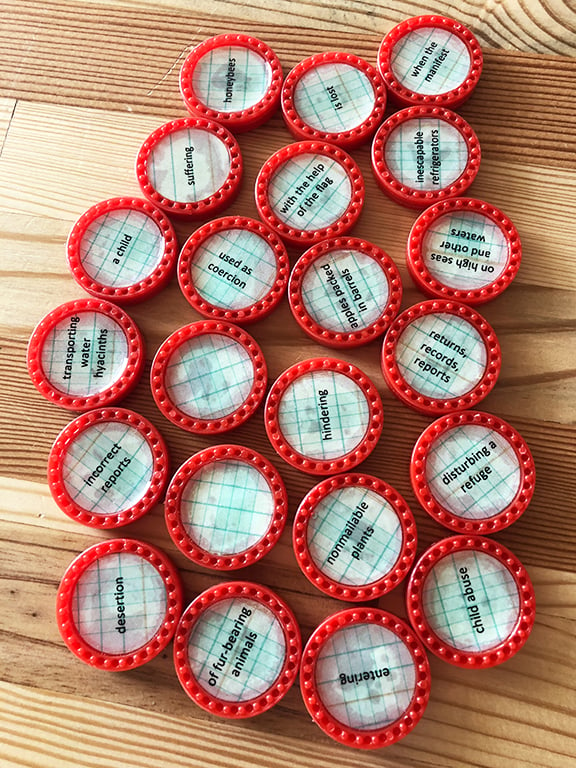 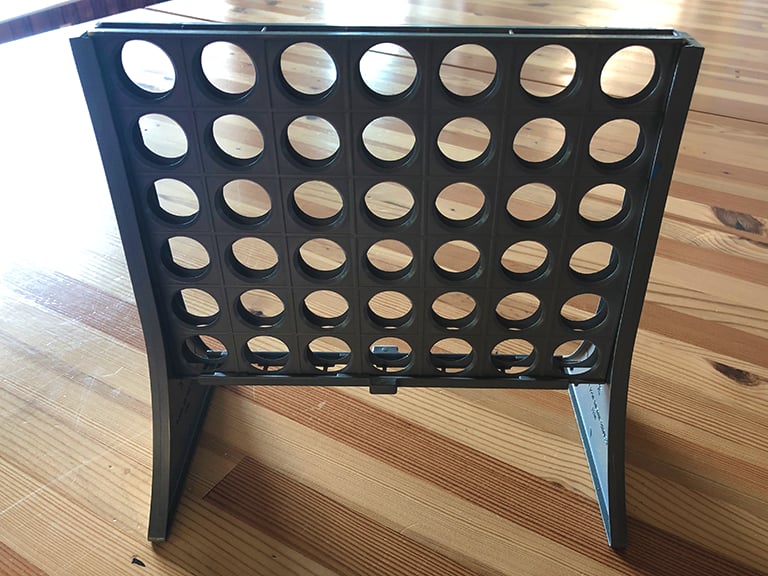 This project is part of Container's Multitudes series, which invites writers and artists to transform the same object into works of visual and literary art. In this series, participants were invited to interpret a vintage board game. Proceeds from the sale of these items are split equally between Container and the artist. This artist's proceeds will be donated to a nonprofit providing legal support to families separated by the federal government.


DisConnect juxtaposes an array of misdemeanors in the United States legal code with the voices of children and parents separately imprisoned and prosecuted for the misdemeanor of border-crossing. As in Connect Four, players have the satisfying task of dropping checkers into place in a wall-like frame. But these pieces have something to say about being put in these places, and the laws that are really being broken.


In Connect Four I love the way the pieces fall into place, the way everything is right in front of you but you still have to pay attention to all the possibilities. Since I'm always coming up with poetry games, I immediately thought it would be fun to add text to the individual pieces so that each game would produce new juxtapositions. A bit like Magnetic Poetry, but with the text also working vertically and diagonally. And a bit like Battleship in that the players look at different sides of the board; each has a different part of the story and reads the possibilities differently.

The challenge was to find or create a text that would respond well to this kind of play. I had a few ideas, but when I was still toying with them I read that the Trump administration was prosecuting and detaining everyone who crossed the border without prior permission and had begun separating children from their parents in the process. I noticed that crossing the border at the wrong time or place is a misdemeanor, and I wondered what a misdemeanor is. A wrong appearance, a lesser transgression, yes, but I couldn’t put my finger on what was wrong or lesser without knowing what else is a misdemeanor. So I dug up a table that listed all the federal laws containing misdemeanor penalties, and right away I saw “transporting water hyacinth.” And there were sponges and burros and telegraph cables, and the whole list seemed eerily reasonable, a window into a world of creatures and transactions and responsibilities and mistakes that could have but hadn’t necessarily harmed anyone.

So I knew I had to work with this list of misdemeanors somehow, this list of things that are, ordinarily, sort of reasonably penalized—impermissible behaviors peripheral to our system of mass incarceration. But I needed language from the families caught up in this travesty as well, the ones whose supposed misdemeanors were being used as an excuse for depriving them of their only stability: one another. Then the audio recording from one of the detention centers came out. As I worked, a few additional accounts were published, and I used some quotations from parents and children in these as well.

Now I had two sets of language and could begin seeing how they worked in relation to one another. The children and parents relate more basic and practical information; what the children need is simple and of profound importance. The misdemeanor texts, which I’d initially found whimsical, began to change in response to both the importance of the subject and the seriousness of the allegations that were coming out. They began to accuse: poor record-keeping, failure to report child abuse, using available relief as a means of coercion...weren't these the very things that were occurring? And they began to invite: interfering with an order of the court, letting a prisoner escape. Did they describe what we must not do, or what we must?

From the first mockup, the differences from other poetry games I'd tried were clear. The array was too complex, and the sanctity of the individual voices too important, to rely on game play to create sentences. I shifted more weight to the game pieces themselves: to the relationship between what was said on each side of the coin, the role of silence, and the ways that game pieces can be both plastic and precious. I decided to print the quotations from parents and children directly on paper my children had dyed for butterfly wings years ago. It felt right to use something worked by children, something transient and precious, that could have been discarded but wasn’t. For the misdemeanors, I used ledger paper my children had scored in one of their many raids of their grandfather’s office supplies. He’s a meticulous record-keeper who came to this country with his parents as a young child from a displaced persons camp.

There are a few problems I didn’t manage to solve in making this piece. One is the dislocation of using English and not identifying the national and indigenous groups involved (not all of which are known). Another is the emphasis on families, as if individuals without family, or those separated from family in other ways, are less important. Also mostly beyond the scope of this project, which focuses on the trauma of separation, is the treatment of the children and adults, including abuses that are still coming to light.