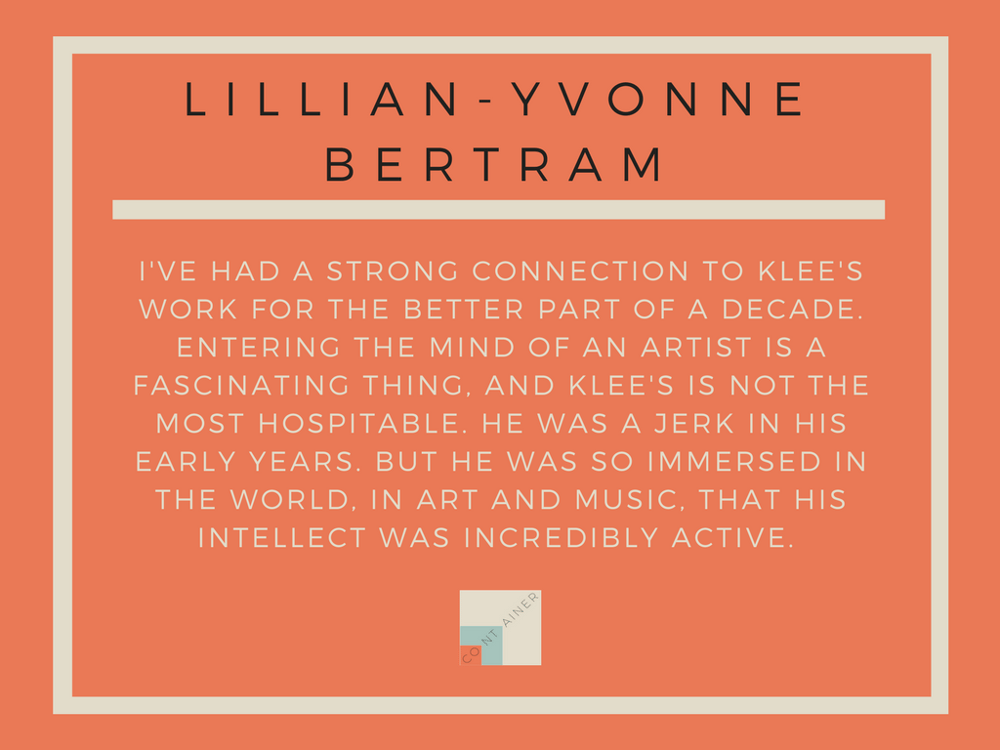 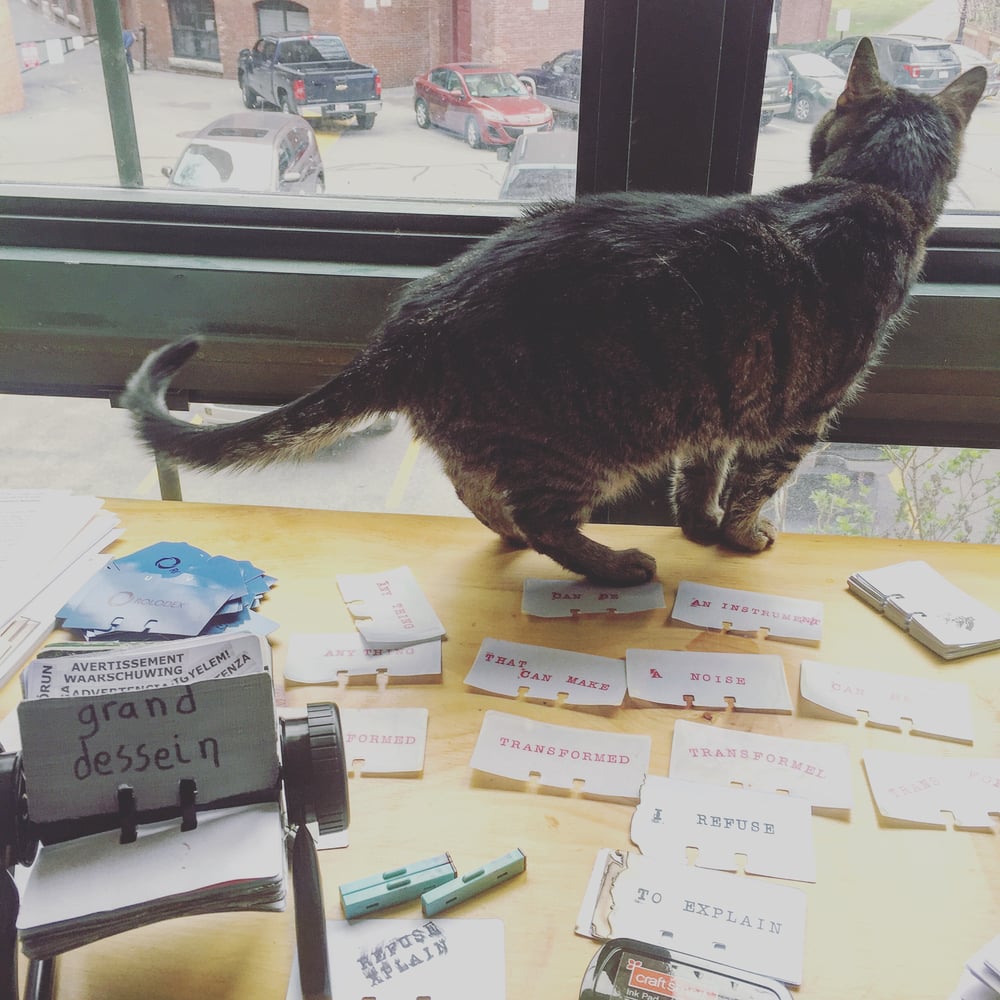 
I let this project and process transform and progress the more I sat with it. I took the Rolodex cards with me to other cities and states and considered what I might do with them. For a while I doodled on them and then wrote phrases that stood out to me from reading I was doing.

At this time I started reading the diaries of Paul Klee. I became immersed in his writing and his work. My friend joked that I was having a romance with Paul Klee, and this isn't far off the mark. I started not just by writing things on the cards, but by creating cards out of other objects and doing away with the paper ones: large photographs that a friend had found in a garbage pile, textile and wallpaper samples. Somewhere in here, I began to think about printing or stamping on the cards and so I purchased alphanumeric stamps and ink pads. Each stamped word is assembled by hand, then disassembled, and assembled into the next word.

Stamping did not seem "permanent" enough--what if the cards got wet? So I decided to "waterproof" them by creating encaustics and dipped each stamped card in dish of melted beeswax, which I melted using a double boiler method. I also began scanning images of his diaries and printing them, and traced the outline of the Rolodex cards onto the images. These were then cut out and shaped using a very sharp knife and glued onto the actual Rolodex card and then coated in the melted wax.

Once I had all the cards (some 250+), I began assembling them into the Rolodex. While Klee's comments about art and the world are fascinating, the placement of his drawings and images in the diaries seem almost arbitrary. Thus I tried to find a connection between his diary musings and selected drawings, and arranged them that way while interspersed with the photographs (onto which the Rolodex card outline was traced and then cut out and shaped with a knife, to replace the Rolodex card altogether). The photograph cards are interjections between the sentences and Klee's images, but comment or reflect both.

Why Klee? Almost pure chance, but I've had a strong connection to Klee's work for the better part of a decade. Entering the mind of an artist is a fascinating thing, and Klee's is not the most hospitable. He was a jerk in his early years. But he was so immersed in the world, in art and music, that his intellect was incredibly active. Even though he almost talks more about music than art (he was a professional violinist) his thoughts change and develop (thankfully) over time. I gained greater familiarity and intimacy with his work and theories and am now working on a much larger written work inspired by Klee.

"Grand Dessein" is French for "Grand Design," and the nature of the Rolodex itself allows a reader/viewer to enter and exit the object's design at any point, as the meditations are always ongoing in the Rolodex's cyclical fashion. It provides a very tactile and sensory experience. The cards "click" against each other like cards in the spokes of a bike wheel, and the beeswax emits a pleasing aroma of honey.

Lillian-Yvonne Bertram is a 2014 recipient of a National Endowment for the Arts Creative Writing Poetry Fellowship. Her first book, But a Storm is Blowing From Paradise, was selected by Claudia Rankine as the 2010 Benjamin Saltman Award winner and published by Red Hen Press in 2012 and was a 2013 poetry nominee for the Hurston/Wright Foundation Legacy Award for outstanding works of literature published by people of African descent.

Her second book, a slice from the cake made of air (Red Hen Press 2016) is available from Red Hen Press and was recently named one of the best poetry books of 2016 by Entropy Magazine. Her third book, personal science, was recently released by Tupelo Press. Winner of the 2012 Phantom Limb Press chapbook contest, her chapbook cutthroat glamours was published in 2013.

She is one-sixth of the poetry collective, Line Assembly. She has been in residence at the Vermont Studio Center, the Montana Artists’ Refuge, has received fellowships from Cave Canem and the Bread Loaf Writers’ and is the recipient of a United States Embassy grant for a writing residency at the Ventspils Writers’ & Translators House in Ventspils, Latvia, in 2014. The 2009-2011 Gaius Charles Bolin Fellow at Williams College, her poetry, prose, photography, and digital stories have received numerous awards and have appeared widely in journals such as Black Warrior Review, Callaloo, Cream City Review, Court Green, DIAGRAM, Gulf Coast, Harvard Review, Indiana Review, jubilat, Mid-American Review, Narrative Magazine, OH NO, Subtropics, Sou’wester, Tupelo Quarterly, Twelfth House, and more.