M. NourbeSe Philip / The Book of Un with Undex 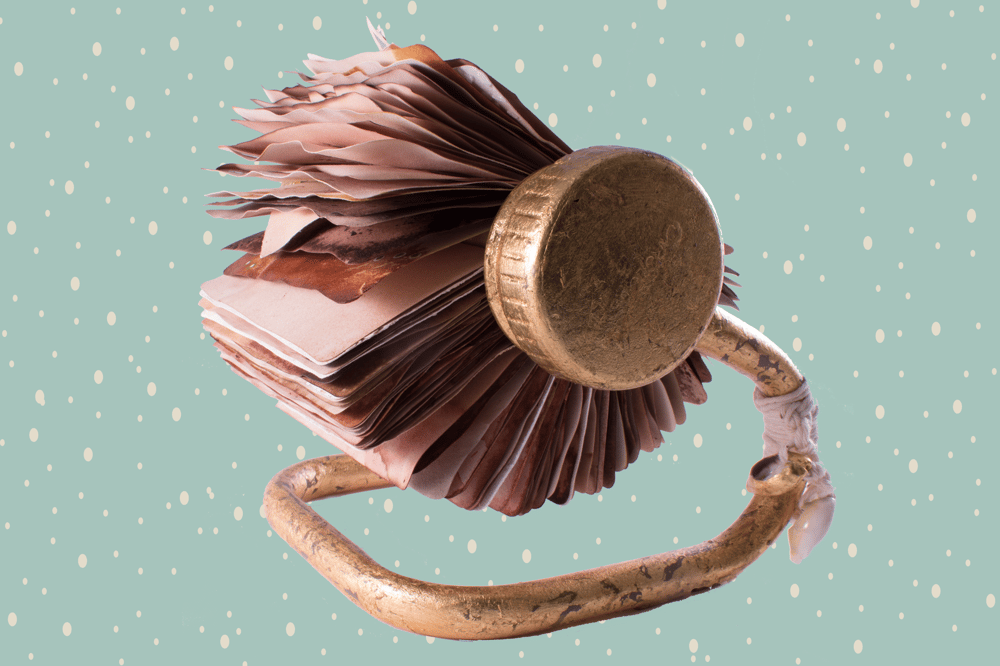 
For the longest while I thought I would be doing something around the idea of an Index. I am a lawyer by training, and many years ago I prepared indices for a legal publishing house, so the idea of the Rolodex brought back the process of systems that aid the reader or searcher in finding information, which is what the index does. I was intrigued by the idea of the tension between the circle and the straight line, which when bent becomes the circle. The Rolodex is in fact a wheel which you turn, but the alphabet is sequential and is akin to a straight line with letters laid out one next to the other.

I researched codes because again the idea of a system that allows you to enter an area that is closed to you seemed relevant. I was also intrigued by the idea of the Index put out by the Vatican which was in fact a sort of reverse index, in that it contained a list of books that "good" Catholics were prohibited from reading. The Index was, in fact, a system that fundamentally subverted the common understanding of what an index is intended to do -- give you access to further information.

The Rolodex sat on my kitchen table for the duration of time I was thinking about what I would do with it. I then started taking out the cards and looking at them and one day decided I would burn the edges of some. The others sat on a shallow pan on top of a toaster oven while I did this. I then had the idea of baking them but thought to use brewed black tea to soak them in as they baked -- not wanting them to catch fire. The results were startling and beautiful. They also retained the smell of the tea. From that it was easy to move to using green tea, beet juice and coffee.

I still had no idea how to realize my ideas about the Undex. Then one morning I awoke and the entire story about the Book of Un was there. I have for the longest while been interested in the power of the prefix un. Two letters that somehow are powerful enough to reverse certain acts or states, but that didn't work for others. The prefix un can be seen to be a kind of spell. Perhaps, also, the idea of the Index of the Catholic church that was really an Undex as it tried to undo the existence of certain books and writings was also at work. The culmination was The Book of Un with Undex, the latter being those words that defy being "unned."

M. NourbeSe Philip was born in Tobago. She earned a BSc from the University of the West Indies and an MA and LLB from the University of Western Ontario. Philip was a practicing lawyer for seven years before turning full-time to writing. She is the author of works of poetry, fiction, and nonfiction. Her collections of poetry include Thorns (1980); Salmon Courage (1983); She Tries Her Tongue (1989); Her Silence Softly Breaks (1988), which won a Casa de las Américas Prize for Literature; and Zong! (2008), a polyvocal, book-length poem concerning slavery and the legal system

In addition to poetry, Philip has published two novels: the young adult novel Harriet’s Daughter(1988), a runner-up for both a Canadian Library Association Prize for children’s literature and a Max and Greta Abel Award for Multicultural Literature, and Looking for Livingstone: An Odyssey of Silence (1991). Philip’s short story “Stop Frame” received a Lawrence Foundation Award in 1994. Her play Coups and Calypsos (1999) has been produced in both Toronto and London.

Philip’s essay collections include Frontiers: Essays and Writings on Racism and Culture (1992), Showing Grit: Showboating North of the 44th Parallel(1993), CARIBANA: African roots and continuities—Race, Space and the Poetics of Moving (1996), and Genealogy of Resistance and Other Essays (1997).

Philip’s numerous honors and awards include fellowships from the Guggenheim Foundation, Rockefeller Foundation, and MacDowell Colony. She is the recipient of awards from the Canada Council for the Arts, Ontario Arts Council, and Toronto Arts Council. In 2001, she was recognized by the Elizabeth Fry Society with its Rebels for a Cause Award, and the YWCA awarded her its Women of Distinction in the Arts Award. Philip has received a Chalmers Fellowship in Poetry and has been writer-in-residence at Toronto Women’s Bookstore and McMaster University. In 2012, she received a NALIS Lifetime Literary Award.
Online Store by Big Cartel
0