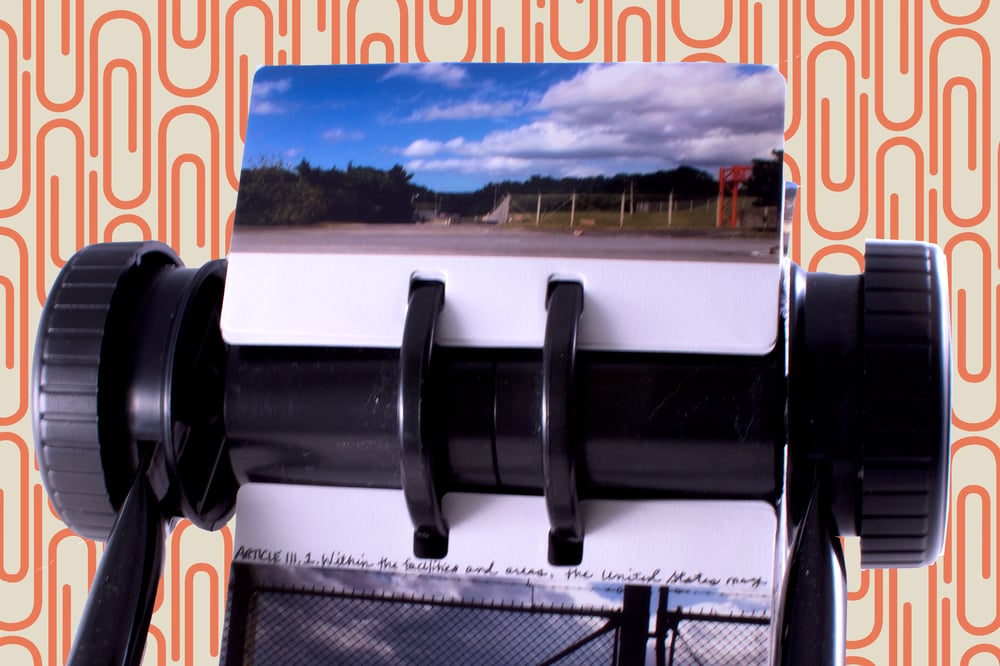 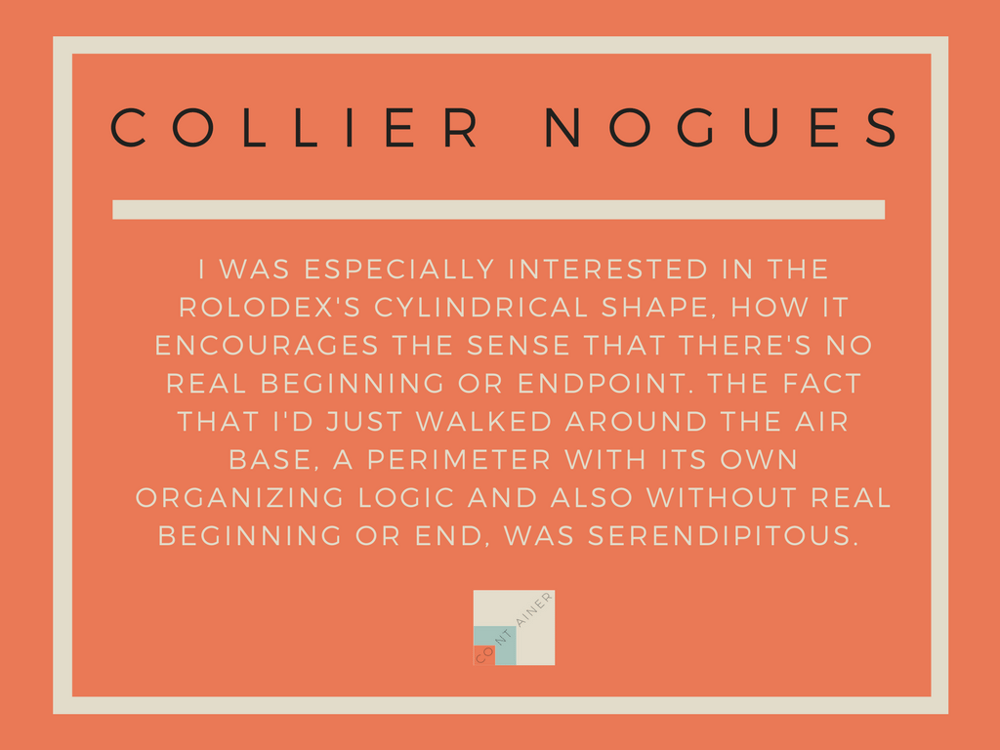 
MINIATURE PERIMETER maps Kadena Air Base’s perimeter fence onto the Rolodex’s spinnable, cylindrical form. Each spread of Rolodex cards is a matched set of images: the view into and out from the fence at the same point along the perimeter. MINIATURE PERIMETER invites you to circumnavigate the base, whose entirety is contained within this Rolodex, as I did in December of 2016.

The handwritten text accompanying the images comes from the official document governing the legal status of the base, informally called the Status of Forces Agreement (SOFA), whose full name is the “Agreement under Article VI of the Treaty of Mutual Cooperation and Security between Japan and the United States of America, Regarding Facilities and Areas and the Status of United States Armed Forces in Japan.” I hope that readers will find interesting discontiguities and resonances between the images and the reproduced text—for example, the photographs of the vegetable gardens and chicken coops inside the fence juxtaposed against the portion of the SOFA’s text allowing Japan to permit Japanese nationals to make interim use of such facilities and areas.

What the SOFA and the perimeter fence have in common is their power over the imagination as well as over concrete actions in the real world. They are accepted as impervious, eternal fixtures of the legal and literal landscape of Okinawa—at least until protests against American criminal activity prompt amendments. The first SOFA amendment came as a result of activism in 1995 when three servicemen raped a twelve-year-old girl. The second resulted from protests in the wake of last year’s murder of an Okinawan woman by a former Marine civilian contractor. Also last year, base authorities painted orange boundary stripes across the base’s five entrance driveways, extending the fence’s literal barrier symbolically across unfenced space, in order to prevent protesters from approaching the gates. My hope is that this anxiety about the power of the fence as boundary and the SOFA as binding document increases, and that further revisions to the sovereignty agreements may become increasingly possible. Nothing about the base is natural. May it seem ever less so.


I wanted to keep in mind that the Rolodex's purpose is to organize information and make it easily accessible. I was especially interested in its cylindrical shape, how it encourages the sense that there's no real beginning or endpoint. The fact that I'd just walked around the air base, a perimeter with its own organizing logic and also without real beginning or end, was serendipitous. I had been looking for a way to use the photographs I'd taken, and it was really exciting to think about containing that walk--the hours it took, the several miles, the several thousand steps--in a 6x6x6 space. I took a lot of pleasure, too, in measuring out the words to fit the number of cards I used. Handwriting the text echoed the physicality of the walk itself, the time it took, the slow pace.

Collier Nogues’ poetry collections are The Ground I Stand On Is Not My Ground (Drunken Boat, 2015) and On the Other Side, Blue (Four Way, 2011). Her work has been supported by fellowships and grants from the MacDowell Colony, the Ucross Foundation, Vermont Studio Center, and Lingnan University. She teaches creative writing in the Chinese University of Hong Kong’s MA Program in Literary Studies, and is a PhD Fellow at the University of Hong Kong, where she studies contemporary poetry’s response to US militarization. She also co-edits poetry for Juked and curates Hong Kong’s English-medium poetry craft talk series.