Notes to Self / Barbara Balfour 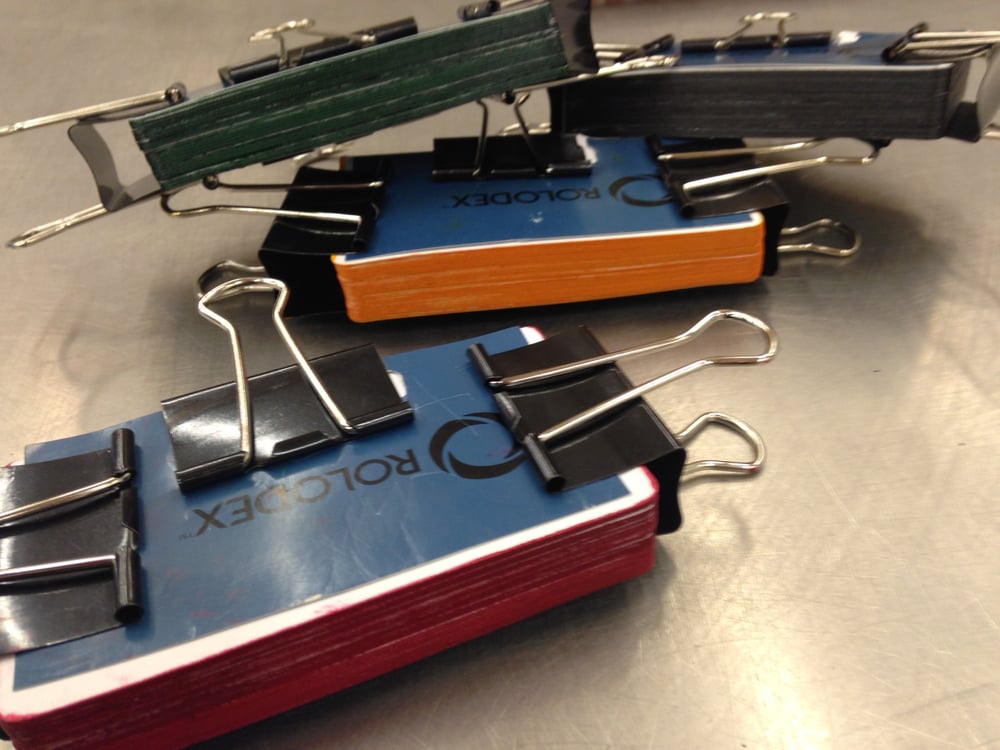 
My starting point was thinking about how the Rolodex is a personal, paper-based memory retrieval system, using an alphabetical organizational system – and how I could do something different with it. Instead of focusing on names of people or contact information for businesses and other contacts, etc., I thought dealing with memory in a more general and subjective sense. I also wanted to divide the 500 cards into a slightly more manageable group of five sets of one hundred, each to be thematically distinct, yet with some inevitable overlap. (This was after rejecting my initial plan to write a 500-word text on the cards, which I thought might be too challenging to read. I did, however, do this with one 100-word text in the project).

The five parts of the Notes to Self project are:

100 Things That Make Me Happy, 2017 (Red) This is a reprise of a project I originally wrote by hand then printed on post-it notes, as reminders of the things (often abstract concepts in fact, more than objects) that make me happy. I’ve updated the list for Multitudes.

On Memory (Green) Reflections on the nature of memory, involving personal and literary references as well as word associations.

Notes to Self (Blue) A selection of notes to myself, ranging from the sublime to the mundane. They include short grocery lists as well as aspirational reminders to read more of certain authors.

Words to Remember (Orange) A list of words I’ve complied over time, which I plan to use in an upcoming art project. I often keep note of vocabulary words in disparate places, but have brought them together for Multitudes.

From Barbara: "I really kept to the form of the Rolodex and its cards, but employed the technique of fore-edge painting from bookbinding to visually separate the cards into five sets of 100."

Barbara Balfour is a Toronto-based artist whose practice has long involved the relationship between the textual and the visual. Her research into text-based art practices and print’s relationship to multiplicity informs her production in artists’ books and multiples, as well as print installation. Her artist’s book The Inkiest Black, in the collection of the MoMA Library, is a response to David Foster Wallace’s Infinite Jest, with a particular focus on his wide-ranging vocabulary and eloquent, idiosyncratic descriptions of colors. Balfour’s other activities include artist residencies (Leighton Colony, Banff Centre, Alberta, Canada; Red Gate Residency, Beijing, China), self-directed periods of research (Marfa, Texas – Judd Foundation; Amherst, Massachusetts – research related to Emily Dickinson), curatorial projects, and critical writing.

Balfour’s upcoming projects will bring together aspects of autobiography, genealogy and speculative fiction, as well as involving an inordinate interest in words as succinct expressions of complex thought. When Balfour is not making art, she teaches print media and theory courses at York University in Toronto, Ontario, Canada, where she is a Professor in the Department of Visual Art and Art History of the School of the Arts, Media, Performance and Design, and currently Graduate Program Director of the MFA/PhD Program in Visual Arts.