What The Ghost Of A Ghost Is / Patrick Williams 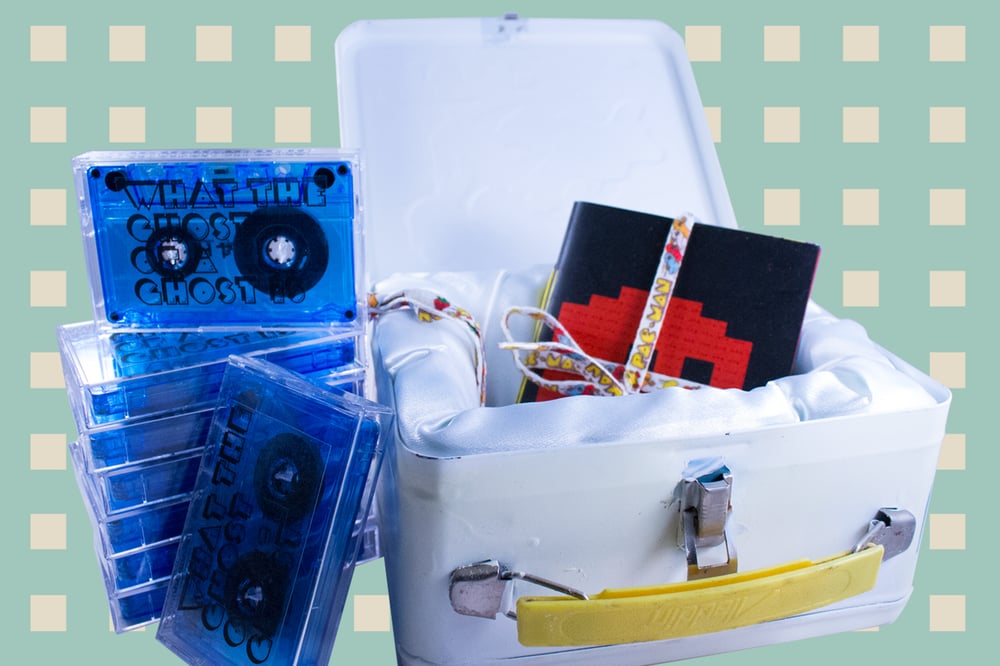 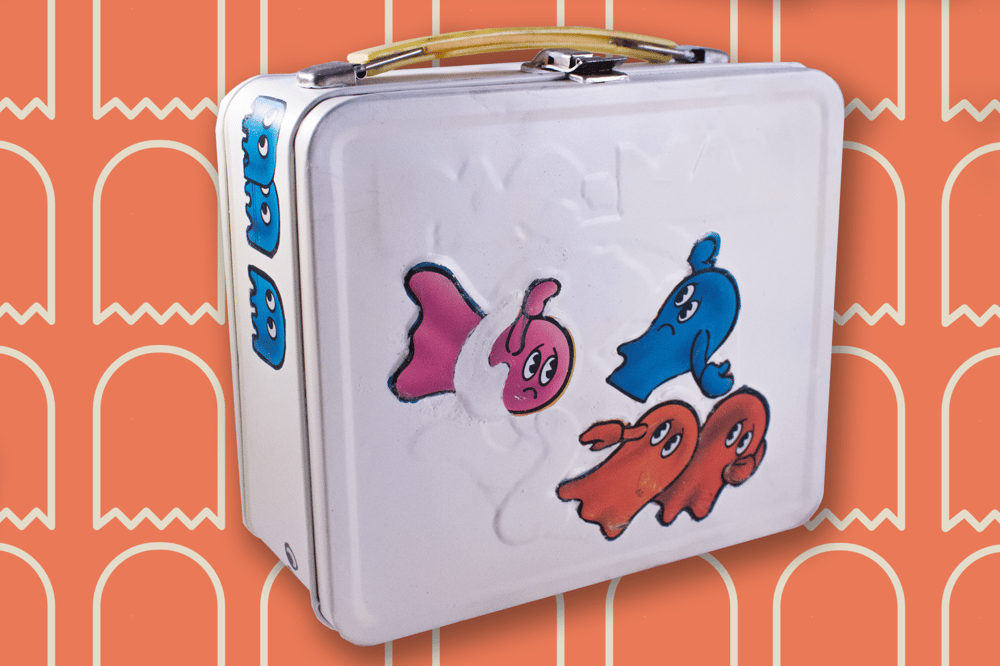 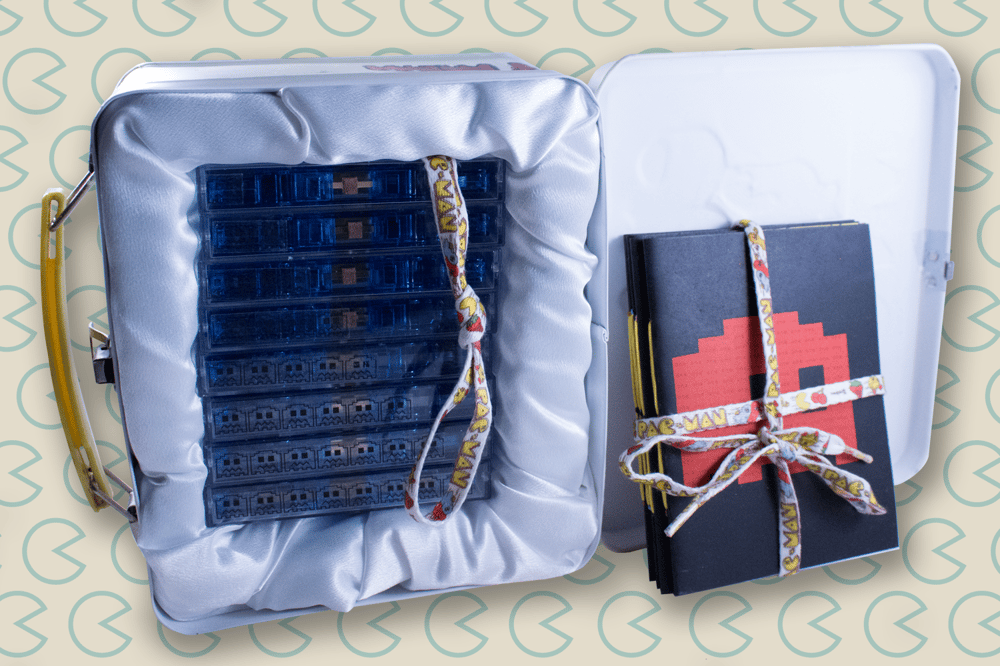 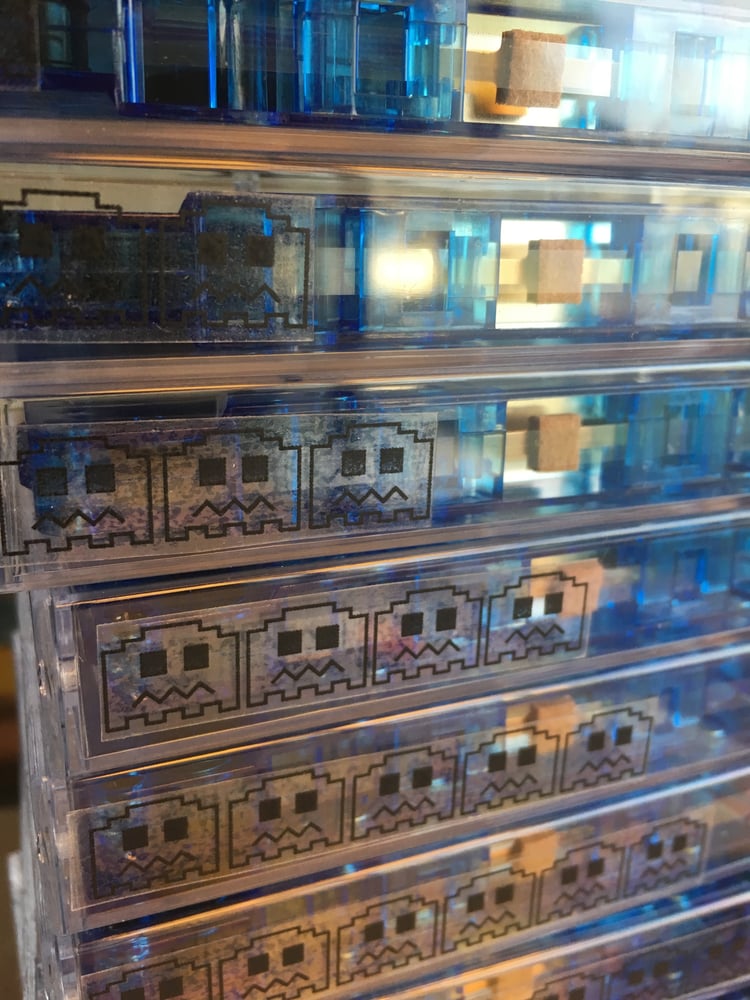 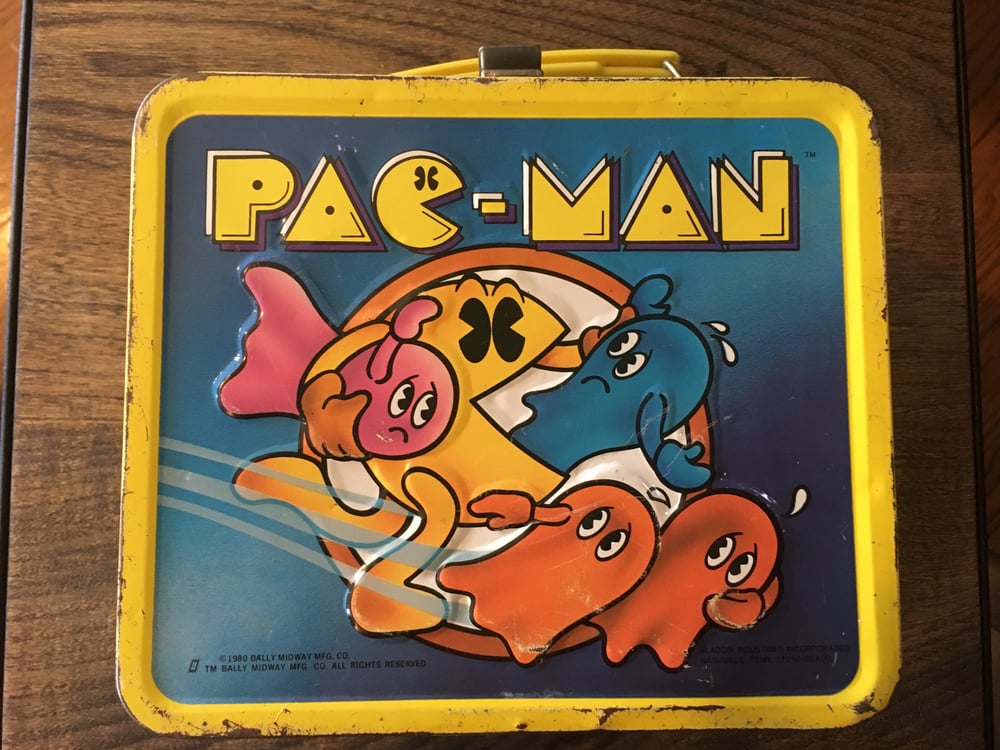 This project is part of Container's Multitudes series, which invites writers and artists to transform the same object into works of visual and literary art. In this series, participants were invited to interpret a vintage metal lunchbox. Proceeds from the sale of these objects are split 50/50 between Container and the artist.


My work generally concerns memory and media, and I was very excited to receive a lunchbox rich in connections to both for this project. When I opened the package containing it, I thought of my 80s childhood spent obsessing over early video games and the new worlds they represented to me. With Pac-Man in particular, I was always confused by the variations among the characters in the game, on the sides of the machine, and in the total saturation of marketing imagery reflected in toys, cartoons, songs, and even a pair of pajamas I received for Christmas, 1980 (which I slept in before I even knew what Pac Man was). Opening the package in 2017, though, I was immediately struck by the sadness of the ghosts represented on the lunch box—they are either being pursued or ingested by Pac Man—and that got me considering their story more deeply than I had before.

I decided to use this piece to foreground the experience of those ghosts as a way of exploring how a game like Pac-Man exists in media and in memory, and where, perhaps, our own ghosts and emotions encode themselves along the way. The idea that these characters, who *begin* as ghosts, exist in a cycle of being destroyed and reborn was particularly interesting to me—the way this narrative applied to a particular instance of play-in-need-of-a-story raises questions about representation, permanence, and regeneration.

Considering the capaciousness of the lunchbox, I decided to preserve its ability to contain, and eventually grew to see it as a coffin-like reliquary in which to house artifacts and evidence from this story. I'm interested in the effects software, hardware, and human experience have on each other, the way their associated constraints collide and occlude and conspire. I decided to produce items for the reliquary which draw attention to how the game exists within and beyond these realms. I located the original source code of the game (which I lightly compressed and encrypted by removing 13,000 spaces) and created a series of four booklets across which to distribute it, each dedicated to one of the ghost characters. While rendered mostly useless as computer code, the material text in the booklets presents readers with the rhythmic possibilities of that text and a tangible, static access to how the game exists in computer memory.

Also contained in the box is an octet of cassette tapes: second, fourth, sixth, eighth, tenth, twelfth, fourteenth, and sixteenth generation duplicates of two recordings derived from the game. Side A on each cassette contains fifteen minutes of gameplay audio (most notably the near constant trill of the ghosts) looped and filtered through analogue synthesizers and subjected to other effects. Side B of each cassette contains a computer vocalization of the source code (compressed down to around 15 minutes from an original 9+ hour recording). Through the various generations of recording, the original audio recedes more and more into the cacophony produced by the dynamics of the audio signal encountering the limits of analog recording technology. As with the source code itself, the recordings require hardware that is both obsolete and subject to much contemporary nostalgia for playback.

On the outside of the lunchbox, I did my best to excise everything that wasn't the ghosts, to tune viewers into the peril in their movement and the terror in their eyes. My hope is that this adds a measure of emotional gravity to reflection on the artifacts stored inside.

Patrick Williams is a poet, artist, and academic librarian living in Central New York. He is the hands behind typewriter.city, a micropress launched in 2016 to release small-run, handmade books of tiny projects that reward close attention in stolen moments. His chapbook Hygiene in Reading was awarded the 2015 Chris Toll Memorial Prize and was released by Publishing Genius in 2016. He edits Really System, the journal of poetry and extensible poetics. He received an MS & PhD in Information Studies from the University of Texas at Austin. Find him at patrickwilliamsintext.com and on Twitter @activitystory.