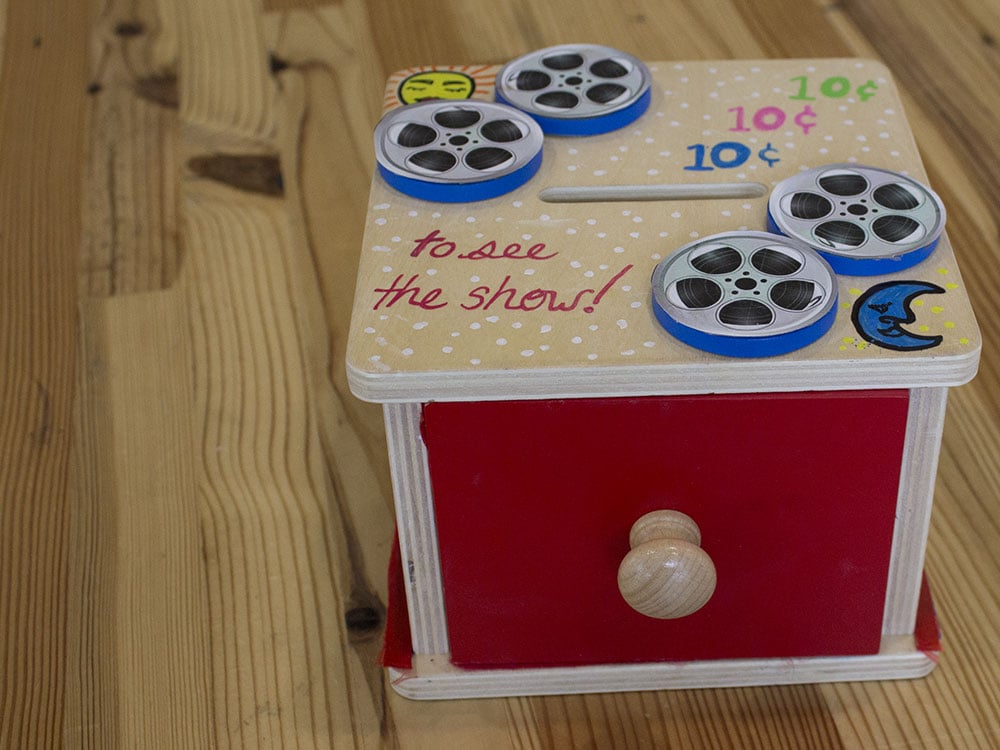 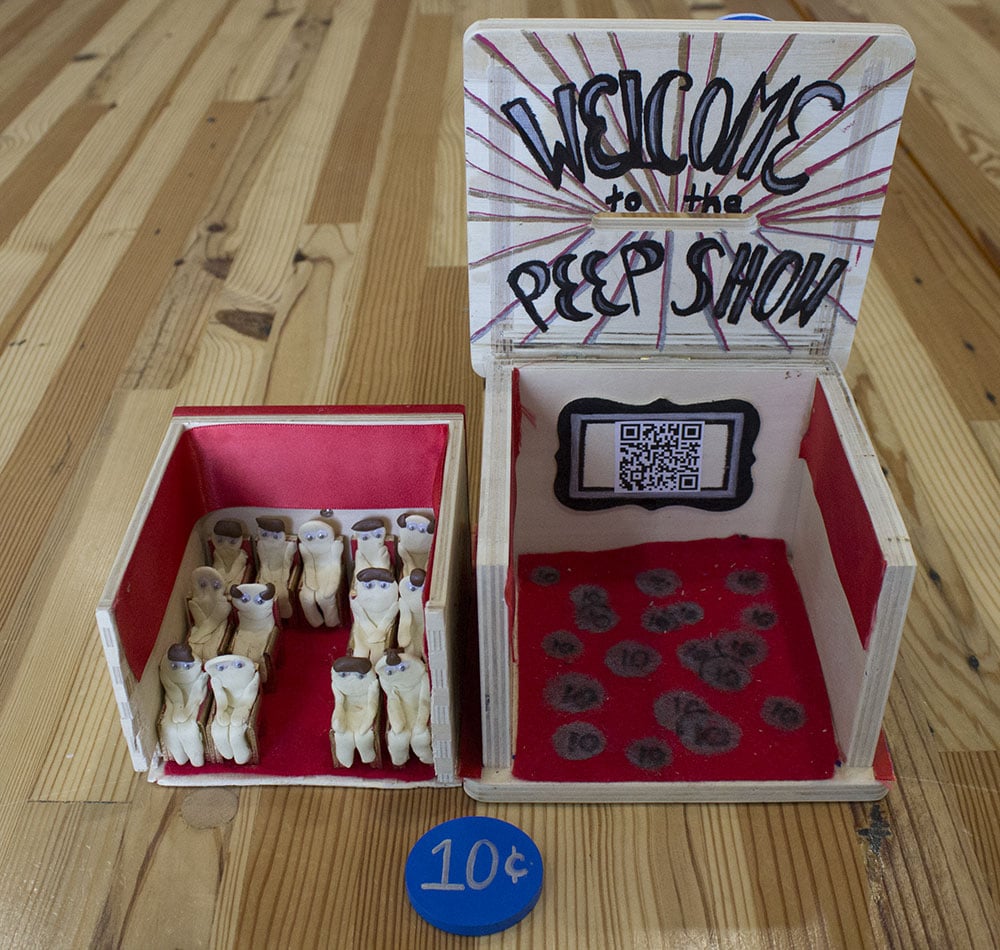 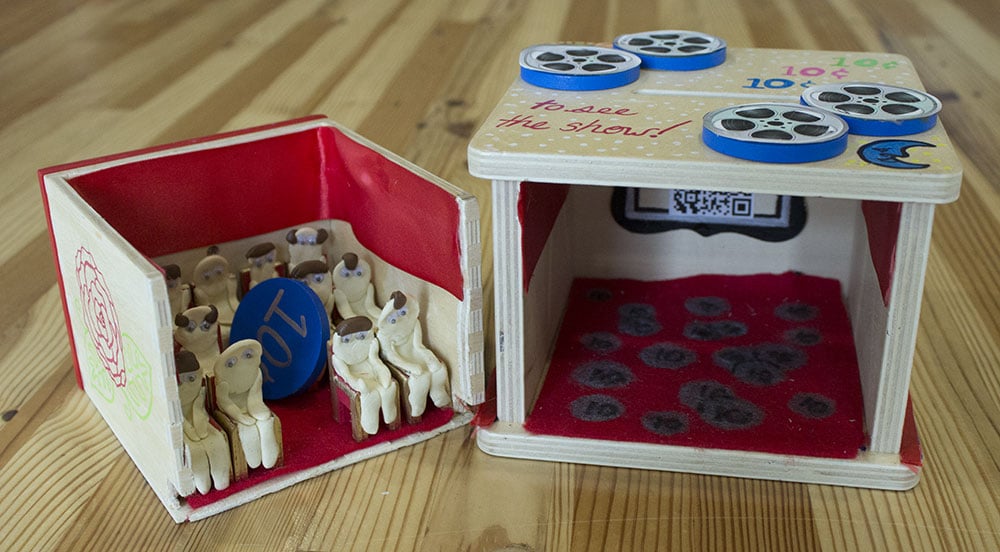 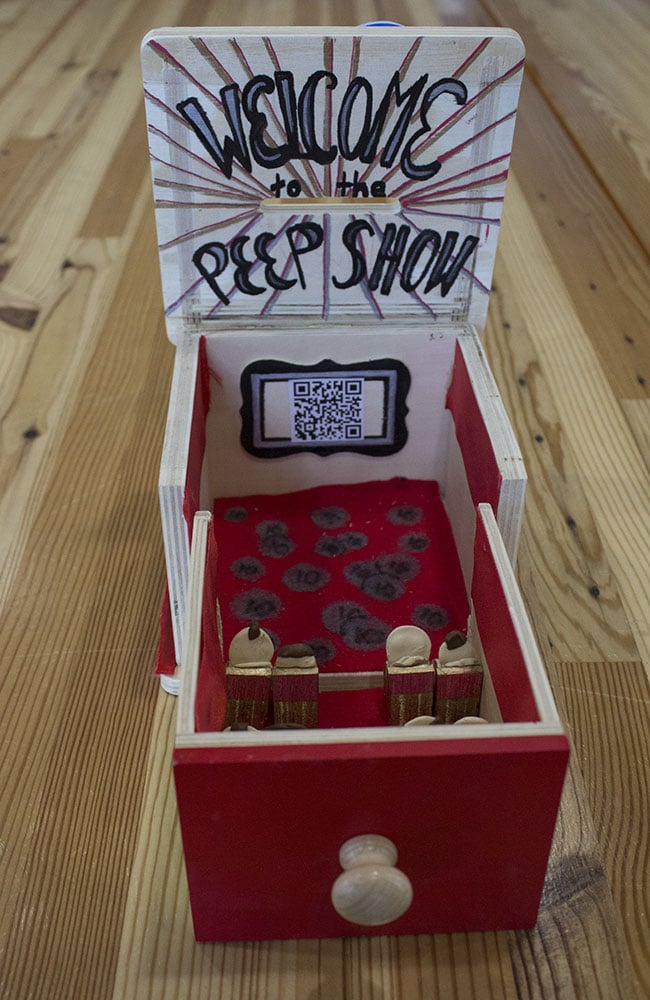 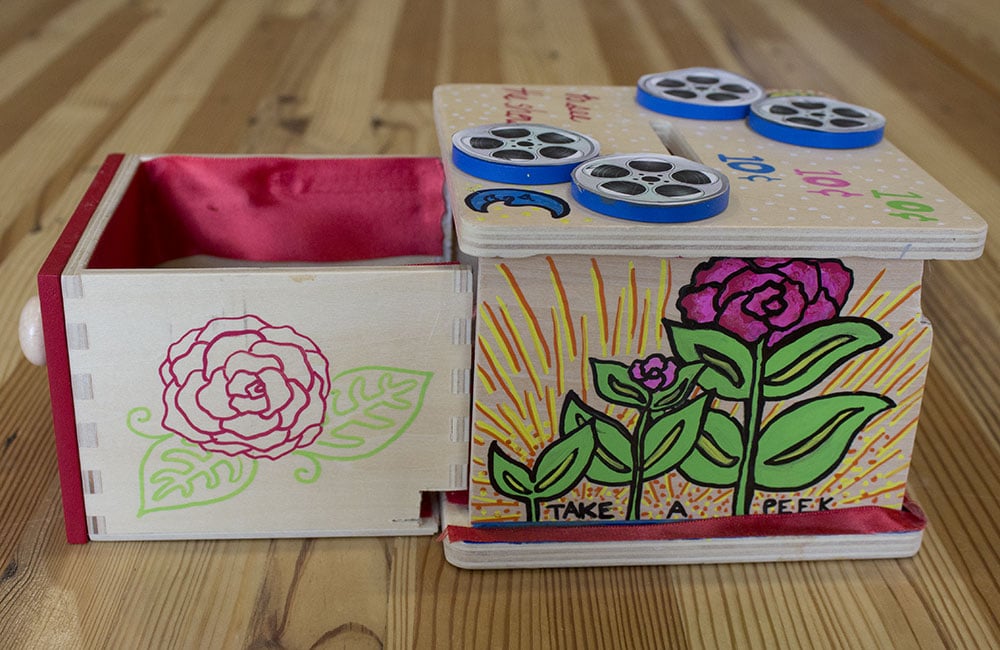 
Peep Show explores the concept of the male gaze as it is experienced in the coming-of-age chapters of womanhood. Without taking a declarative stance on the portrayal of women in society, we, the artists, worked to portray the male gaze as we knew it to exist within our own lives: a male gaze that is duplicitous—speculative, private, innocent, and more sinister. Our book explores the nature of this “coming of age” period as one that exists in a liminal space between the outer world and the inner world, a space that is penetrable by men’s eyes as they seek access to more private spaces and project their own meanings and intentions onto those spaces.

The outermost layer of the object, the drawer aspect, is meant to serve as both an enticing, inviting, come-hither type of façade, while also harkening to the more innocent, child-like, dreamy aspect of our girly selves as we teeter the line between girlhood and womanhood.

Upon opening the drawer, and thereby reaching past the first layer of the piece, we begin to get to the heart of the thing, a heart that is filled with men who have also chosen to break past that initial layer of innocence, and we are therefore left in a space that is more dangerous, a more vulnerable place that is left to the mercy of the men’s eyes.

This brings us to the final layer of the piece—what the men are watching. As the viewer opens the piece, and unlocks the inner space, they will find themselves prompted to watch the same show as the men, which is accessible via QR code that is pasted to the “movie screen.” This movie directly mimics our, the artists’, experiences with the male gaze, as we portray the way we feel watched, the way our normalcy becomes sexualized. The video contains footage of what we consider our everyday lives—what our world looks like when we are just living, rather than trying to put on a show, but pays homage to the idea that, in a way, we always feel that we are being watched.

And this watching of the “movie” brings us right back to the beginning, the feelings associated with opening the drawer in the first place. Any viewer will be prompted to open it, to see what’s inside, though the drawer represents privacy and secrecy. But those needs to access the drawer, to take a peek, pay homage to the more sinister means of access that the men represent, a type of voyeurism or violation of the women on the screen.

Our book tells a story, but, most importantly, it tells our story. Our book grants meaning and understanding to experiences we have had in our own lives. Our book offers other women a chance to recognize their own experiences, to create an object of solidarity. And, furthermore, it gives those women a chance to turn the tables, to project their experiences onto the scene before them, whether they recognize them or not, and gain control over the men seated in the theater—to objectify them, look them up and down, put them on display, this time.


Jessamyn Wolff is a poet, visual artist, and an MFA student at UMass Boston. She is originally from Western Michigan and received her BA and Certificate in Creative Writing from Central Michigan University in 2017. Her work has appeared in Pork Belly Press and most recently in Hanging Loose Press.

Jacqueline Rosenbaum is currently an MFA student studying prose at UMass Boston. She is originally from Long Island and received her B.A. from Vassar College in 2016. She was granted Runner Up in the 2018 Haunted Waters Press Fiction Open for her story “Tennis Lessons,” which has since been published in their annual literary journal “From the Depths,” and her story “A Table Set for Five” is set to be published in Adelaide Literary Magazine in Spring 2019.
Online Store by Big Cartel
0