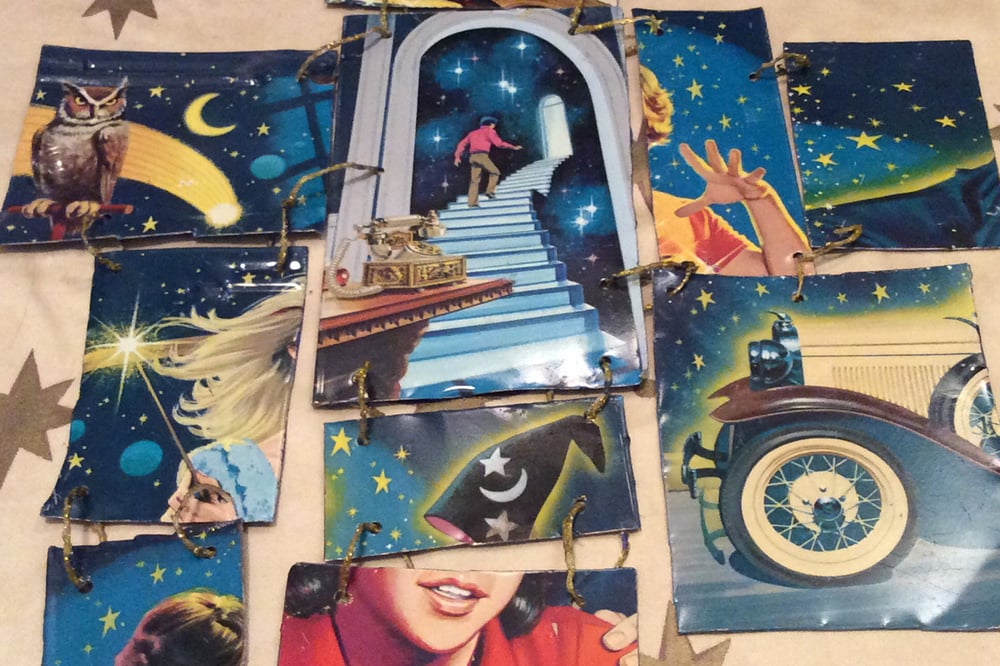 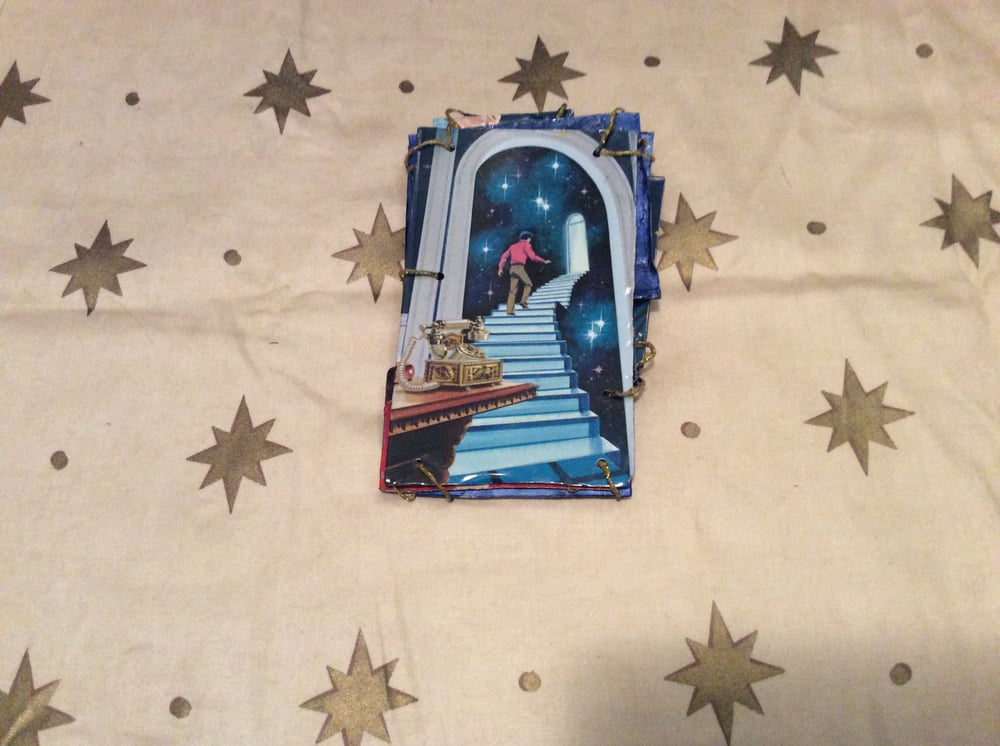 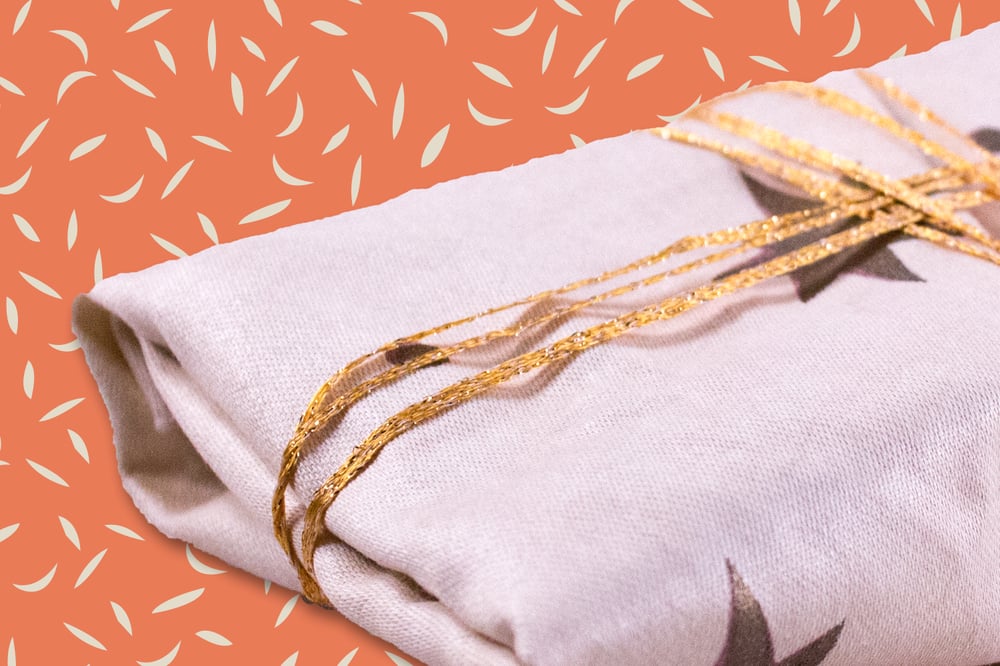 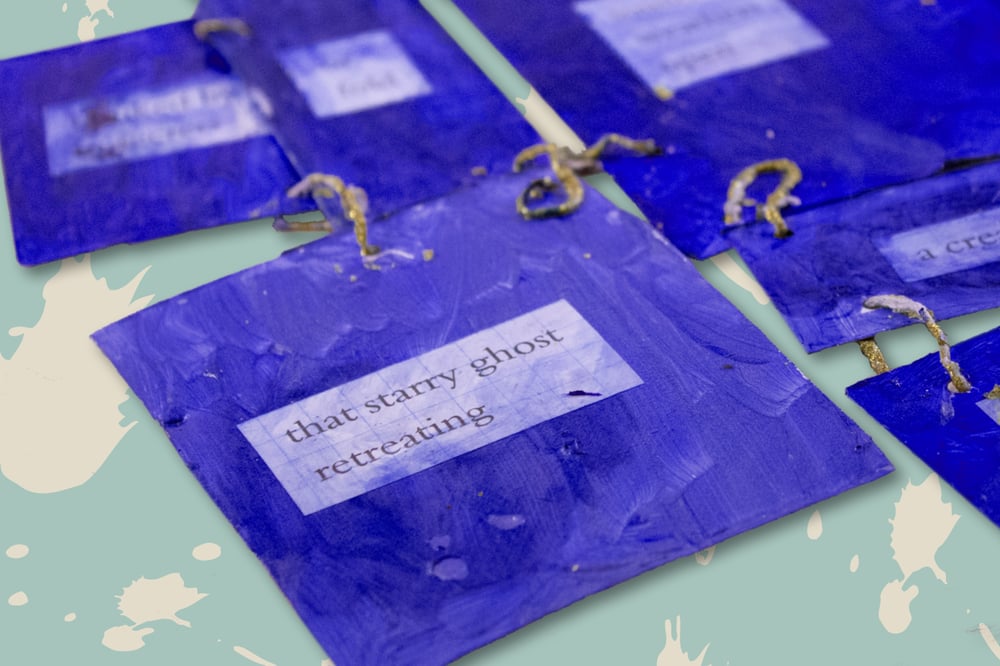 This project is part of Container's Multitudes series, which invites writers and artists to transform the same object into works of visual and literary art. In this series, participants were invited to interpret a vintage metal lunchbox. Proceeds from the sale of this object will be split between Container, artist and the Baltimore Station North Tool Library.


This project was a huge experiment for me. Though I love working with odd materials, reclaiming mundane, often discarded things, when I got the lunchbox I admit I was stumped. I'd never heard of the television show it celebrated, and the images didn't particularly speak to me (although the colors did).

So I sat with it, or, rather, it sat on a chair. I glued beautiful blue marbles into it, but then ripped them out. I felt stymied, strangely uninspired by the shape of the thing.

But what is a box? A container, yes, but also a secret. I remember my elementary school lunchboxes—not metal, but cloth, and easily made sticky by a spilled drink or squished apple. A box—a lunchbox—can hold this mess, but this mess also seeps out, smells, makes gluey the body.

What would happen if I opened it, deconstructed it? What would the story become then?

I considered having the man cut the lunchbox, I did. But it didn't feel quite right. My sister the artist, visiting for several days, encouraged me to keep looking. A woman at the art store recommended a makerspace, a hacker's night, the tool library. She said, You can do this yourself.

I found the Station North Tool Library, asked if someone there could cut the box. They were adamant: I really could do it myself. They were encouraging, helpful, unjudgmental, patient with my questions. They lavished me with supplies. I left excited, empowered, and a new annual member.

And so the lunchbox opened up. I began outside one hot day, but my neighbor, seeing me, reminded me that I could use the basement workspace. Another space still opened. I sat there, sawing, worried about the noise I was making, worried about the sharp edges I was creating, until I stopped worrying and just did it. I cut myself, bled a little. Eventually, the saw gave way to the snips—faster, more precise, and satisfying. All these tools I hadn't used. Tools women often aren't taught to use.

The thing took shape, developed new character. Stories became more evident to me. Suddenly, the images were rich, full of mystery. One night, I painted words on with chalk markers, let them sit and stew. I reclaimed other materials—nail polish, embroidery thread—thinking of teenage girlhood, but also because they're what I have around; I am generally inspired by what is just around.

The end—this folding and unfolding book—still feels new to me, slightly dangerous. But, as I started, an experiment. Which is all I ever hope for. The process is the thing, the box undone and remade.

Anne Marie Rooney is the author of Spitshine (Carnegie Mellon University Press, 2012) and No Beautiful (Carnegie Mellon University Press, forthcoming 2018), as well as chapbooks from The Cupboard and Birds of Lace. Her poetry has been featured in the Best American Poetry and Best New Poets anthologies, and been the recipient of the Iowa Review Award, the Gulf Coast Poetry Prize, the Greg Grummer Poetry Award, the So to Speak Poetry Prize, a Barbara Deming Memorial Grant, and others.

She is a founding member of the poetry collective Line Assembly. Since 2011, she has been collaborating with her sister, the painter Julia Rooney, on a mail project that uses the USPS as a method of production, distribution, and exhibition. She has taught interdisciplinary, arts-integrated classes for kindergarteners through senior citizens, in venues ranging from museums to community centers to libraries to schools.

Born and raised in New York City, she currently lives in Baltimore, and is a student in Expressive Arts Therapy. Read more at stolenplums.com.